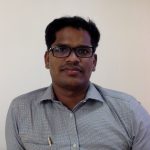 Research work in our laboratory is focused on Infection Biology; we aim to study the host-pathogen interactions through exploring the various Epigenetic signals of human malaria-causing pathogen and host. The obligate intracellular pathogens utilize the host factors for its growth and to establish chronic infections. Thus, it is highly essential to understand the molecular regulators of pathogens and the host cells that are involved in these processes and further it will be exploited to design better treatment strategies against infectious diseases. Using various Biochemical and Cell biology tools and genetic knockout strategies, we aim to study these processes in two important human pathogens viz Plasmodium spp. and Toxoplasma spp. We reported functions tRNA-specific methyltransferase from P. falciparum (BBA-Gene Regulatory Mechanisms, 2017) and characterized m6A RNA methyl-specific reader protein from P. falciparum (Epigenetics & Chromatin, 2020). Further, we have identified a novel epigenetic mechanism that controls the exported family surface proteins and virulence mechanisms in the malaria parasite that mediate the development of severe forms of cerebral malaria in humans (J Biol Chem, 2021); (ChemBioChem, 2018). Overall, our lab aims to understand the host-pathogen interactions for better drug and vaccine design against infectious diseases such as Malaria and Toxoplasmosis.

The P. falciparum expresses and exports highly variable proteins on the surface of infected RBC for cytoadherence. The parasite changes its variable protein in response to host immunity. The variable proteins are encoded by multigene family (~60 genes), and located at the subtelomeric regions across all 14 chromosomes. It expresses one var gene at the time of infection and maintains the remaining 59 var genes in suppressed state. The gene suppressor mechanism is achieved through clustering of var genes to nuclear periphery. It has been shown that H3K36me3 is highly enriched in repressor clusters, however the mechanisms in which the H3K36me3 methyl mark is propagated, and forms suppressor var gene clusters to nuclear periphery is unknown. We have identified PHD domain that binds strongly to methyl mark and allosterically stimulates the enzyme activity to propagate H3K36me3 methyl marks and clusters var genes into nuclear periphery. Our preliminary study has identified novel mechanisms of var genes expression in Plasmodium spp (Figure 1) and detailed study on this line would pave way for better vaccine designs against malaria.

Project 2: Molecular basis of Exportome regulation in Plasmodium spp to remodel the iRBCs

We have identified epigenetic methyl marks at unconventional sites on core histones of P. falciparum. Interestingly, all these methylations sites are located at the core histone on lateral surface of the nucleosome and reside very proximal to DNA contact point on histones. We characterized H3K64me3 mark and found it highly dynamic on the chromatin, enriched in ring, trophozoite stages and reduced in multinucleated schizont stage. This is first evidence show the dynamic deposition of the histone methylation marks in various developmental stages of P. falciparum. We have done a detailed characterization of H3K64me3 mark and have identified that the PfSET4 and PfSET5 enzymes of P. falciparum specifically methylate at H3K64. The global ChIP sequencing analysis has revealed that stage-specific dynamic distribution of H3K64me3 regulates the exportome family proteins in Plasmodium spp. This is first molecular evidence that shows the direct role of epigenetic players in stage specific gene expressions (J Biol Chem, 2021).

The artemisinin drug resistant P. falciparum is emerging problem to the tropical countries. Recent reports identified that the parasite harbors mutations in ubiquitin ligase adaptor Kelch13 protein in propeller domain. We hypothesized that K13 protein mutations could bring the differential proteome of metabolic pathways associated proteins in P. falciparum to exert the resistant to artemisinin. The preliminary data from our lab identified that selective -gain and loss- of proteins in artemisinin resistant parasites. The MALDI analyses have identified three important proteins that are associated with metabolic activity shows differential expression in artemisinin resistant P. falciparum. Further characterization of these proteins would identify the mechanisms of drug resistance and will find path for drug discovery against resistant malaria parasite.